Create an Account - Increase your productivity, customize your experience, and engage in information you care about.

All Patrol vehicles are equipped with Mobile Data Computers which link to the state and national crime computers and the Intranet which links to other Departmental units and the Records Unit. This allows the officers 24 hour real time information and instant updates.

The patrol units are also equipped with state of the art digital video equipment for the collection of evidence and racial profiling data. 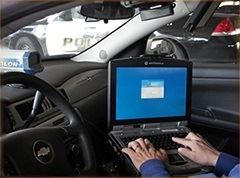 On August 31, 2009, personnel resources of the Patrol Division were reconfigured to better address the needs of the community. Under the new deployment system patrol officers were organized into four shifts, designated as A Shift, B Shift, C Shift and D Shift. Each shift consists of a lieutenant, 4 sergeants and a team of officers.

This deployment altered the work schedule into 14 day blocks instead of the traditional 7 day work week, having each shift work an 11.5 hour day on a schedule of:

This allows every officer to have a weekend off every other week. In addition to the deployment system, the City was divided into 4 sectors with 19 designated patrol beats. This system allows for better supervision, increased visibility, and improved police service to the community.